My entry in the contest that I earned a top 5 spot in is featured today on http://the-new-author.blogspot.com/. I hope you will read it and let me know what you think. The blog members will vote on the stories soon. Keep your fingers crossed.

The last time I was a finalist was in 1971 at the Miss Walla Walla pagent! Now, it’s for a much better contest. Not really very significant for anyone else, but an important marker for me. There is a blog called The New Author that recently held a writing contest. I have placed in the top 5 for short stories and will be voted on for the #1 spot soon.

Im humbled and excited that a story of mine caught someone’s attention – especially since it was a true story about my grandmother. It is a story that is near and dear me. I hope you will look at the blog. Im not sure, but I think the site will make it available to read soon. I will keep you all posted.

Nice to have some good news.

I had an intense experience today. I am playing Jesus’ mother Mary in the Easter production at our church. We have been practicing for several weeks but today was different. The young man that plays Jesus was in full costume and makeup. It takes 2 hours to do his makeup and today I saw why. The story starts with the miracles of Jesus and then moves to his arrest, trial, and crusifixion. For the first time I was up close to Jesus made up in his blood stained body, cuts and bruises. The make up looked so real that it startled me. I had a hard time looking at it but the scene called for me to be at the foot of the cross during the crusifixion. Our Jesus actor puts his whole heart and soul into the part and that also added to the intensity of the scene.

Some may not believe that Jesus was the Son of God. For those of us who do, the reality of the way He died is painful, the reason for his death is sobering, the result of his death is liberating. The startling realness of what I experienced today was no where near what those who were actually at the cross experienced. The violent death of Jesus was a sight I would never have been able to witness.

This Easter season will come and go. But I dont think I will ever look at it the same way again.

I thought it was rather rude that we had to wake up to 2 inches of snow this morning. It feels like this winter will never end. I am so anxious to get on with outdoor activities and feel the warm sun again. I am ready for new things. I have begun submitting articles agian after a long period of writing books exclusively. Since there are virtually no publishers out there willing to take on the financial risk of unknown authors, I will redirect my efforts to article and short stroy writing. It would be nice to make some extra money by doing it, but it would be worth it just for the experience and exposure.
I hope I can relate to that small sprig of tulip that is trying to poke through the snow. It senses that spring is on it’s way and it’s not going to let a little cold weather get in the way of it’s purpose. That is the way God created it to function and it gladly obliges. I want to also be about doing what I was designed to do – praying that what I produce will have the same impact as the flower from the tulip. It shows God’s glory and brightens the world.
I still want the snow to go away….now! 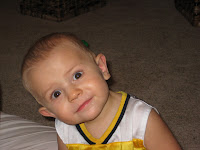 I heard once that grandchildren are God’s reward for not killing you kids!
I went to my son’s house today to go shopping with my daughter in law. She is pregnant with their second child. They just found out that it will be a girl and are very excited. I personally wanted a boy, as we have 4 granddaughters and only one grandson. His name is Jaben, age 2 1/2, and is my son’s first child. I know it’s great for them to have one of each, but I do love baby boys. I have great fun and a close relationship with my granddaughters and I love buying all those frilly things. But, there is just something about a little boy that warms my heart.
As soon as I arrived at Jaben’s house this morning, he came running down the stairs to greet me. I picked him up in my arms expecting a nice, big hug. Instead he looked me straight in the eyes and said ” dont go to store!” I told him I would return soon to see him, but I got the same reply; “no, not go to store!” As much as I wanted to go shopping for girl stuff with my daughter in law, those words tugged at my heart. I would also love to stay there with him. The more I explained that I had to go the more upset he got. Finally, he relented when I told him I would bring him a treat from the store. I wasnt sure what I was going to find at the fabric store to bring home to him, but I would find a way!
As we were leaving I heard “Grandma, hug!” I was relieved to know there was not going to be a scene. Off we went and when we returned, he was asleep. Rats, I wanted another hugging session!
Aren’t grandchildren great??? I have known no greater joy in life such as being a grandparent. I hope those of you who have or are getting a grandchild will treasure the quickly fleeting days of influence you have with them. Spoil, spoil spoil. Then give them back to the parents! It’s what God intended.